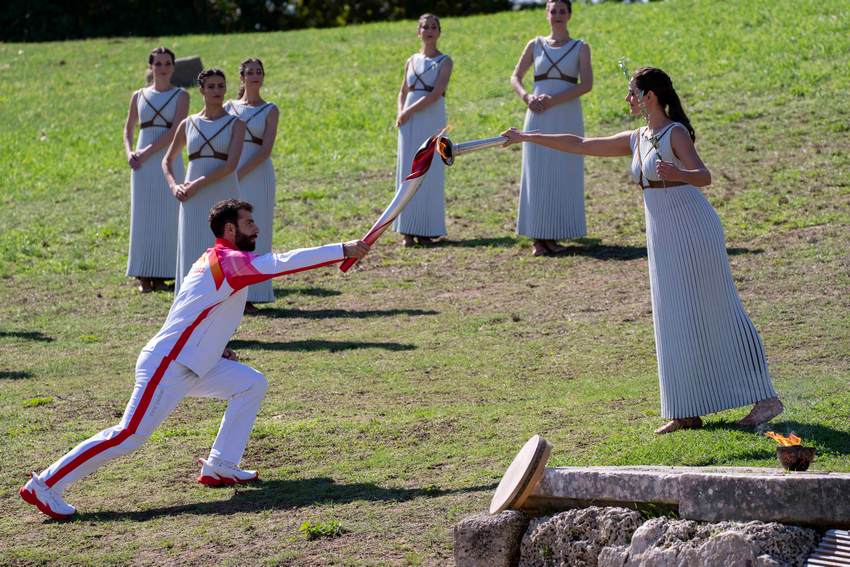 The Olympic flame for the Olympic Winter Games Beijing 2022 was lit today in Ancient Olympia, Greece. This marks the start of its journey to China where, in just over 100 days, the Games will begin.

As a symbol of peace, unity and solidarity, the Olympic flame will convey the values of Olympism to all those that see it on its travels. The flame will help build anticipation amongst Olympic fans eager to witness the world’s best winter sports stars in action, whilst also inspiring thousands of athletes who are making their final preparations for these Games.

Speaking at the ceremony, IOC President Thomas Bach made it clear that the Olympic Games have always stood above conflict:

“In our fragile world, where division, conflict and mistrust are on the rise, the Olympic Games always build bridges. They never erect walls.

“The foundation for the ancient Olympic Games to take place in peace was a sacred truce – the ekecheiria. This Olympic Truce ensured a halt to hostilities, allowing athletes and spectators to travel safely to Olympia and home again. The ekecheiria demonstrates that already the ancient Greeks understood that for the Olympic Games to unfold their unifying power, they must stand above any political conflict. In this way, already 3,000 years ago, there was an inseparable link between the Olympic Games and peace.

Turning to the host city, he added: “Beijing will write history as the first city ever to host both the summer and winter editions of the Olympic Games. The Olympic Winter Games Beijing 2022 will connect the Chinese people with the world, bringing to life China’s vision to engage 300 million people with sport on snow and ice, changing winter sport forever. The entire world will see this passion when China welcomes the best winter sport athletes.”

Peace and solidarity were an important theme throughout President Bach’s speech in Ancient Olympia. He concluded by saying: “The Olympic Games cannot address all the challenges in our world. But the Olympic Games set an example for a world where everyone respects the same rules and one another. They inspire us to solve problems in friendship and solidarity. They build bridges leading to better understanding and friendship among people. This is the timeless message that this Olympic flame will send from our spiritual home here in Ancient Olympia, to Beijing, and to the world.”

Representing Beijing 2022, Yu Zaiqing said: “This is a historic moment as we are gathering here in the ancient city of Olympia to celebrate the lighting of the Olympic flame for the XXIV Olympic Winter Games.”

He continued: “The Olympic flame embodies our unswerving pursuit of excellence. It highlights our resolve to always challenge our limits and surpass ourselves. And it sheds light on our journey ahead, to overcome difficulties with greater solidarity and closer cooperation. Amid the outbreak of the coronavirus disease, the Olympic flame has brought us confidence, warmth and hope. It has been a source of strength in our fight to defeat the pandemic.”

The traditional ceremony, held near the Temple of Hera, celebrates the Olympic Games’ Greek heritage, connecting the modern Games to their historic origins. After the Olympic flame was lit by the High Priestess, it began its journey with Greek skier Ioannis Antoniou, an Olympian who also assumed the role of first torchbearer for the Olympic Winter Games Sochi 2014. The flame was then passed to Chinese Olympian Li Jiajun, a winner of five medals in speed skating at the 1998, 2002 and 2006 Olympic Winter Games (two silver and three bronze medals).

After the ceremony, the Olympic flame will be transported to the Panathenaic Stadium in Athens, where on 19 October the official handover to the Beijing 2022 Organising Committee will take place before the flame departs for China. A welcome ceremony will be held in Beijing on 20 October, with the flame initially going on display to the public at the Beijing Olympic Tower before setting off on a flame exhibition tour. Closer to the Games, a traditional Olympic Torch Relay will be held. More information will be announced by the Beijing 2022 Organising Committee after the arrival ceremony on 20 October.

Around 2,900 athletes, representing approximately 85 National Olympic Committees, will compete in what will be the most gender-balanced Olympic Winter Games in history, between 4 and 20 February 2022. Photo copyright: IOC/Greg Martin