Gold!!! Ruggero Tita and Caterina Marianna Banti bring Italian sailing to the Olympus of Tokyo 2020. The Italian pair dominated in the Nacra 17 and, strengthened by their first place in the 12 qualifying races and already sure of a medal, won over Great Britain (the only contender, fifth at the finish line) and settled for sixth place in the Medal Race. They are the Olympic champions (35 points) in the mixed foiling catamaran, and with them, Italy has won the gold medal 21 years after Alessandra Sensini (Mistral) and an Olympic medal 13 years after the two won in Beijing 2008 by Sensini (silver, RS:X) and Diego Romero (bronze, laser). Great Britain (45 points) and Germany (63) complete the podium.At an early stage I had asked the IOC to hold this award ceremony," said CONI President and IOC member Giovanni Malagò,” for I had seen it coming.”

For the Italian team, this is the fifth gold medal won at Tokyo 2020 and the 29th medal won at the Japanese Games (surpassing the 28 podiums of Rio 2016) when there are still five days to the end of the five-circle event. (photo Pagliaricci GMT Sport) 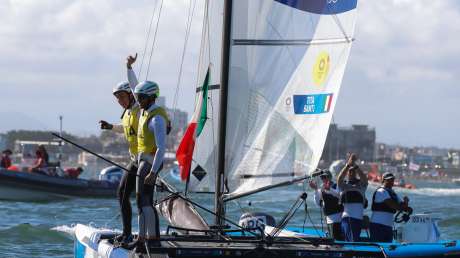