Lightning Jacobs in the 100m! For the first time, the fastest man in the world is Italian

Double gold in Tokyo 2020!!! Lamon Marcell Jacobs is the fastest man in the world! It was not enough for the athlete to be the only Italian to have reached the Olympic final. He put himself behind everyone, crossing the finish line in 9"80 (better than the 9"81 with which Usain Bolt won in Rio 2016), new European record, ahead of the American Fred Kerley (9"84) and the Canadian Andre de Grasse (9"89). Waiting for him was Gianmarco Tamberi, who had won the title of Olympic champion in the high jump a few minutes earlier. A dream night for athletics and Italian Sport. Golden dreams from Japan. The Italy team is there! (photo Pagliaricci GMT Sport) 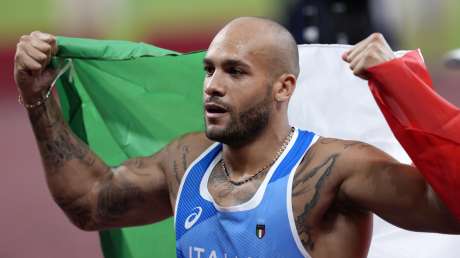 Foto Gallery: Jacobs the Italian fastest in the world